One of the major additions in the 2011 NFL CBA was the introduction of the fifth-year option as a way for teams to retain their first-round picks for one extra season at a cost-controlled level. For these high draft picks, they receive a raise on what they were making on their rookie deals, but it is certainly not what they could be making on the open market.

I wanted to take a look at the value generated above replacement level from first-round picks in their fifth year to try to see if certain positions have been more cost-efficient depending on where in the first round they occurred. Historically, the most surplus value in the NFL Draft was found in the late first round and early second round, per the famous Massey-Thaler paper on surplus value acquired from the draft. Recent research from Brian Burke revisiting the Massey-Thaler paper in the context of the new CBA shows that the surplus value of picks in the second and third rounds has increased since the original study.

But first, a little more background on fifth-year options is necessary. Former first-round picks who are still with their original team (they have not been released from their rookie contracts) after the third year of their career are eligible to have the option year exercised. The fifth year is guaranteed for injury only when the option is initially exercised; on the first day of the league year in the player’s fifth year, it becomes fully guaranteed.

There is a difference in the fifth-year option salaries for the first ten picks of the first round and picks 11-32. Top ten picks receive a fifth year salary equivalent to the transition tag for their respective positions from their fourth year in the league. For players drafted in the rest of the first round, the fifth year salary is equal to the average salary of the third highest through 25th highest paid players at their position.

To assess the marginal cost per unit of marginal value of the different positions, I decided to use Approximate Value (AV) above replacement level and then divide the percentage of the salary cap being paid to each type of player above the minimum salary level by that value generated. For those unfamiliar with Approximate Value, an explanation of the statistic can be found here. The NFL minimum salary for players with no experience was $435,000 in 2015, which was 0.30% of the salary cap. Since the NFL salary cap changes from year to year, using the percentage of the cap per unit of value above replacement makes more sense than simply using raw spending amounts.

I included seasons in which the first round picks had 0 AV in order to avoid selecting on the dependent variable, and I defined replacement level AV as 3.00, which is what Football Outsiders uses as their measure for a replacement level player. I also chose to exclude punters and kickers from the study because there were only three of them combined out of the 1024 players in the sample, making it impossible to draw any sort of legitimate conclusion on those positions.

Below is a table featuring the AV above replacement level data for the two subsets of first-round picks and the associated sample sizes:

There are a few important things to make note of here. First, the sample of tight ends is quite small, so a cost-efficiency calculation may not be accurate. In other words, take the result for tight ends with a grain of salt. Additionally, Pro-Football-Reference does not always reliably distinguish between inside and outside linebackers from season to season, so I combined the two linebacker groups together. In today’s NFL, outside linebackers in a 4-3 scheme play a much different role from their counterparts in a 3-4, but the salary for the fifth-year option is the same across all types of linebacker positions. This suggests that there will be a distinction in value between the two positions depending on what scheme a given team runs.

Then, to come up with the value by position, I had to calculate the percentage of the cap spent over the minimum salary level per unit of AV above replacement level. For the fifth-year option players, I used the percentage of the cap taken up by the option number in the 2015 season above minimum salary level and divided that by the AV above replacement level listed above.

In Table 2, I have the AV above replacement level, marginal percentage of the 2015 salary cap taken up by the fifth-year option, and the marginal percentage of the cap divided by AV above replacement level for all positions except kicker and punter. The salaries for the options are assigned based on somewhat outdated positional designations, but since that is what the NFL uses, I chose to remain consistent with that method of classification. The color scale in the table ranges from dark red for the worst value to dark green for the best value. Inside and outside linebackers were again assigned the same AV and salary values and treated as one position group.

Table 3 depicts which of the two subsets produced more value by position, a column to indicate whether the difference was small (which I defined as having less than a minimum salary’s worth of value between the two), and a translation from percentage of the cap to 2015 cap dollars, with the same color scale as in Table 2. 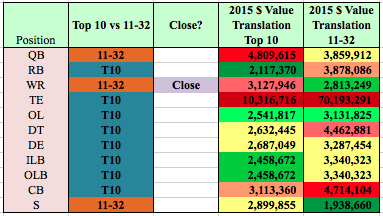 From Tables 2 and 3, we can draw some interesting conclusions. The only positions where players generated more value in their fifth year from the latter part of the first round were quarterback, wide receiver, and safety. While initially a little strange at first glance, this makes sense because players taken from picks 11 through 32 have been historically more likely than top ten picks to be released or otherwise generate 0 AV in their fifth year, with a washout rate of 21.05% (21.00% with kickers removed) compared to 12.15% for players taken in the top ten.

Quarterbacks taken in the top 10 were more expensive with respect to the marginal cost of the fifth-year option, but that makes sense because it is a premium position where players are often drafted too early because of team need. Since quarterback is such an important position, teams are liable to draft quarterbacks earlier than their relative cost with respect to the fifth-year option would suggest

However, the teams that are in desperate need of a quarterback to the point that they would use a first-round pick on said player are often very bad. This also probably contributes to why quarterbacks are taken earlier because teams do not want to risk missing out on their quarterback of the future because they moved down in the draft. It would be wise to explore the possibility of moving down if the quarterback will likely remain on the board. The team can still get their desired signal caller while simultaneously acquiring another selection or two for their trouble.

The position in the top ten subset that generates the most marginal value under the fifth-year option salary is running back (remember, lower numbers are better because it is dollars per unit of AV above replacement level). It is worth noting that Trent Richardson and the rest of the 2012 draft class is not included in the study, so that number will likely change once the class of 2012 has collectively played their fifth season in the league.

If you only include players who produced a positive amount of AV in their fifth season, the positions that are more valuable are more likely to come from selections 11 through 32. In this case, the only positions where top ten picks are more valuable are at running back, offensive line, and cornerback. However, as discussed earlier, this would be a case of selecting on the dependent variable, which is something we should avoid.

While this study treats inside linebackers and outside linebackers as if they are in the same position group, that is not the case in today’s NFL. It is likely that outside linebackers who are edge rushers in a 3-4 would generate a different level of value than their 4-3 counterparts, and that is something I would like to investigate further in the future.

The work of Massey, Thaler, and Burke clearly shows that players in the later part of the first round and early part of the second round generate more surplus value over the life of their rookie contracts. While their research seems like it might conflict with the information presented above, Burke’s study, in particular, focuses on the first four years of a player’s career (as he was valuing all 256 picks, not just the first round); there must be a change in the marginal cost per unit of marginal value for the fifth-year option, which makes sense because it is effectively a new one-year contract tacked onto the end of the rookie deal for first-round picks.

This analysis does not take into account the value of trading down for additional picks. It is possible that a team sitting at pick number eight, nine, or ten might be able to acquire more draft capital in a trade by trading down a few picks. The player who they want to draft may have a higher marginal cost per marginal unit of value in the fifth year, but I would imagine that the decreased salary commitment over the first four years of the contract in addition to the extra picks acquired would make it worth it.

Another thing to make a note of is that NFL transactions do not occur in a vacuum. A team like the Seahawks, for example, might have wanted to exercise their fifth-year option on Bruce Irvin, but the team’s salary cap allocation to their other star players did not allow for that to happen. As a result, Irvin is hitting the open market as a free agent after his fourth season instead of being tied to the Seahawks for one more year.

One last factor to take into consideration is that teams will sign their foundational players to extensions before the end of their rookie contracts to prevent them from hitting the open market and seeing their contract offers inflate. The fifth-year option presents teams with an added negotiating tool to improve their leverage when working on these extensions, which may slightly increase how valuable the fifth-year option is to NFL teams. I would be interested to see how the relative values change in the future as more data becomes available, assuming that in the next CBA, there are not drastic changes that might eliminate that contract tool.

[1] Special thanks to the Harvard Sports Analysis Collective for sending us their dataset; it significantly reduced the amount of time needed for raw data collection.